The “roots-family” is large and even as these lines are being written it is growing, we are all united by the desire for heart connection with the common goal of the ceremony to heal our mother earth.

Mexico, Ixtlan del Rio (Nayarit) – the Mother Kiva, every year around the winter solstice people gather there for prayer

Austria, current cycle completed
In 2012, a bridge was built across the Atlantic for the first time and the ceremony was held and organized for the first time in Europe in the Austrian Waldviertel by the Feuerkreis – Association for the Promotion of Nature Connection and Cultural Exchange (www.feuerkreis.at).

The collected impressions from four wonderful years of the Roots of the Earth Kiva ceremony in Austria (Waldviertel, Lower Austria) can be found here: Feuerkreis – Gallery

Netherlands, current cycle completed
From Austria the fire of the Kiva-Ceremony 2016 – 2019 migrated to The Netherlands our north-western neighbors.

India,
In 2019, the Kiva ceremony was a guest at the Kumbha Mela in India, and ceremonies in Africa and Australia are being planned. 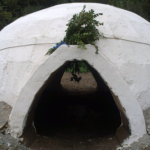