Home » About Roots of the Earth » The origin vision

Chief Reymundo Tigre Perez, a medicine man born in the Purhepecha people, received the gift of a vision during a sun dance.

“He saw a dark-skinned woman crying. This woman was our Mother Earth. He saw how an excavation opened up in the earth on her tears and people of different languages and sounds with different colored robes came and walked into the earth and prayed at a fire. Joyful that her children were reunited, the woman began to sing and emit her healing power.”

“Roots of the Earth”, originally “Kanto de la Tierra” is based on this vision, which continues to unfold to this days.

Following her invitation, Tigre evolved on a spiritual path from warrior to medicine man and visionary.

With his vision, Tigre Perez recognized the need to bring the Amerindian cultures and, moreover, the worldwide indigenous and re-indigenous cultures together again in order to exchange ideas and to preserve the wonderful old customs, medicines and traditions together and to pass them on to the younger generations and interested people.

In 1976 Reymundo Tigre Perez founded “Kanto de la Tierra”, “Song of the Earth”, an association of first nations from North, Central and South America, consisting of tribal representatives from Canada to Peru. Led by a council of elders, the “Council of Indigenous Native Americans” (CINA), consisting of twelve active members, spiritual leaders, medicine people and chiefs.

The vision manifested itself more and more when the tribal representatives of the various nations of “Kanto de la Tierra” began to meet for a prayer and earth healing ceremony lasting four days and nights (revived from an ancient form of the ceremony in a Kiva, a round earth space).

The Kiva is a place of prayer and inspiration, where the sacred circle, the sacred bond that connects all nations, heals.
A fire burns in the middle, symbolizing the divine presence. Those who approach the fire recognize their own place in the circle and learn how to live in unity and harmony with all life.

This room of prayer, the Kiva, creates a positive magnetic field that transforms the mind and heart of all human beings and reunites with the beings of heaven and earth. In 1992 a delegation of 13 elders, led by Reymundo Tigre Perez, traveled to Europe. They were received by schools, universities and town halls (including in Munich) and answered questions and concerns of the audience in numerous press conferences and discussion events.

The true value of Tigre’s vision became apparent with the invitation to other cultures around the world to participate. In 1995, on the second day of the kiva ceremony in Texas, Reymundo Tigre Perez was appointed an intertribal chief by the council of elders and members of seven different tribes.
As a sign of respect for his work over many years, he was presented with a jewelry made of eagle and condor feathers (and thus another bridge between North America – the eagle and South America – the condor was built).
Two days later, Reymundo Tigre Perez changed in to the world of spirits.

The sacred fire of the Kiva-Ceremony was passed on from Reymundo Tigre Perez to three guardians, including Heriberto Villaseñor “Tecolozintli – honorable owl”, a long-time friend and companion. 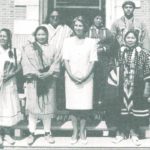 The Elders messages from 1992

“We are here to promote an encounter of peace, understanding, forgiveness, reconciliation and harmony. This encounter is intended to help us get to know us as a people, as a continent and as a world family.” ... mehr lesen / read more ... 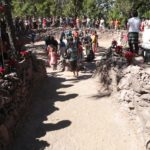 Heriberto Villaseñor and his wife Nubia Rodriguez took on the task of continuing this ceremony and extending it to all continents ... mehr lesen / read more ...