Home » About Roots of the Earth

About Roots of the Earth

The world united in one prayer

Roots of the earth is a movement to preserve tradition and spirituality of the peoples from all over the world, to build bridges, to exchange ideas and to share wisdom with one another. In the Kiva-Ceremony, we connect in love, honour and respect with Mother Earth and all life that surrounds us and we put ourselves in the service of a greater vision of intercultural encounter and peace.

The vision
This form of ceremony originated from the vision of the medicine man Reymundo Tigre Perez from Texas, which he received about 50 years ago during a sun dance.

He dedicated his life to the spirituality of the indigenous peoples and the coming together of the various traditions and spiritual forms from all five continents of this earth and the encounter between indigenous peoples and modern society all over the world.
His vision opens the door to a greater universal consciousness of humanity and the possibility to strengthen the geomagnetic network of the earth, as well as to give healing to Mother Earth and all her beings.
In his vision it was shown to Tigre that Mother Earth needs us and calls us to work and pray together. 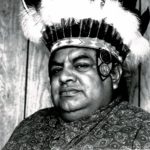 Chief Reymundo Tigre Perez, a medicine man born in the Purhepecha people, received the gift of a vision during a sun dance ... mehr lesen / read more ... 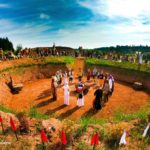 The kiva – a circular excavation – dug in the body of Mother Earth – open to heaven, with five altars – for the four cardinal points and the fire in the centre, serves as a place of ceremony ... mehr lesen / read more ...

The "roots-family" is large and even as these lines are being written it is growing, ... mehr lesen / read more ...