The topic of female bleeding or menstruation is handled very differently in different cultures.
Nubia Rodriguez, an elder from Roots of the Earth and wife of Heriberto Villasenor, Director Raices de la Tierra, has set herself the task of bringing back original feminine knowledge to us women to give the moon time women – the women in their menstruation – a place in the ceremony.

She entrusted us to work from our heart with the moon time women.

We would like to use these information pages to open up a possibly new perspective on the subject of moon time and to recommend a few things to everyone important during the Kiva-Ceremony for women in their menstruation.

The meaning of moon time in the Roots of the Earth ceremony and a guidance to/during moon time can be found at the end of this page:

You men are also invited to be interested, to inform yourself, to contact local women’s groups and to exchange ideas.

> The energetic change in the cycle of a woman
In us humans, the main life energy flows upwards in a right-turning spiral.
In the moon time, the woman’s energy turns around and flows left-turning down into the earth.
This opens up a deeper connection to Mother Earth in us women. We can drain all the burdens of the previous month into the earth and cleanse ourselves and at the same time we give our moon gift to mother earth – our blood.
It is truly a beautiful gesture and a touching ritual to give our blood to the earth to compensate for all the gifts that we receive from her every day.
Mother Nature is happy about this gift and feeds on it.

We women know this left-turning energy, we are all familiar with the state of lunar time.
In the circle of women, a moon time woman is always very welcome in the ceremony, as she is in her greatest power of prayer and can intensify the blessing of the ceremony.

The men do not know this state in their body, the moon time energy flows in the opposite direction to their own energy.
Accordingly, it can happen that men get headaches or weak knees due to the energy that is drawn into the earth during the moon time. To them, it can feel like energy is being drained from them.
If a moon time woman is in a ceremony, her strong power may reverse the energy of the ceremony and turn it to the left. Not all men can hold this power in the ceremony.
For this reason, we invite all women who are menstruating to come to the women’s sweat lodge and visit the Moon Square at the Kiva.
The men we would like to invite women to have the courage to ask about the moon time. In our openness to one another, we can learn more understanding and, above all, more respect for one another.

> In the greatest power of prayer and blessing as the veil opens
In the moon time the veil opens to the spiritual world and woman has deeper access to the spirits.
The perception of the otherwise invisible increases.
So it is not only possible for her, but even her task, to go into the depths of prayer during this time and to send out all good wishes and prayers for the good of all, as well as to attract and create positive energies.
The moon time women can work a great blessing for their family and the community in this holy time and bring positive things into life for the good of all.
However, if we are only busy with everyday life, we do not use this beneficial power. Often women today completely reject lunar time because this knowledge was no longer imparted. But when we give ourselves the space of retreat and prayer and enter into contact with Mother Earth and Father Heaven, we notice what possibilities, what power and perception are available to us at this time.
Due to the deeper access to mother earth and the spirits and the open gate to the invisible world, the moon time women in some peoples take on a guardian function in the ceremony.
They take their place next to the entrance. Through their deep connection they can perceive what is happening around and feel it when bad energies come in.
In other traditions, they stand behind the elders, children, and other participants in a protective and praying manner.

> Occupy the sacred space
Today it is seldom possible for us to withdraw during menstruation because we still have to look after our children and cannot simply be away from work for five days every month. That’s too bad. But the elders encourage us again and again to allow ourselves at least a few hours of rest and retreat every day during the moonlight period.
They also remind us of the importance of explaining lunar time knowledge to our husbands and children and of asking them to be very clear about the time of rest, help and support we need.
The elders also urge us to keep thoughts as clear as possible during this time and to consciously place all good wishes for ourselves and all our loved ones in the future.

> Time of purification
There were and are times and cultures in which women were viewed as “impure” during the moon time and were excluded during this time, that is, they were not allowed to participate in ceremonies.
In other cultures, on the other hand, they knew about the enormous cleansing but also blessing power that works in a woman at this time, and the moon time women have taken on their very own place and special tasks.
Everyone knows the so-called “dragon time”, when we women spit fire with rage, can no longer hold back and the facts slam on the table. We wipe out what we have withheld, break out of ourselves whether we want it or not.
Since we now have to earn money in addition to raising children and are doing more and more of the same work as men, we can often hardly escape the daily stress. In addition, our bodies have to deal with a lot of environmental pollution. In the course of the month, a lot can accumulate in us women that can find its way out during the bleeding.
Perhaps you have already noticed that these days the cream turns into butter when whipped or that a meal you cook just doesn’t taste good despite all the seasoning. These are the dragon days on which we should be very careful with ourselves and also when meeting others, or allow ourselves a rest period in which we consciously purify ourselves.
During this time it might make sense not to be in the middle of a crowd, but rather to stay on the edge of the action or behind the people. During the ceremony, we respectfully ensure that we do not touch any ceremonial objects and that we do not prepare any food for others, as these moods can be transmitted.
So be happy, you can let yourself be cooked for these days.

> The moon time, a great transformative power
In the moon time, a great transformative power opens up in women. All the stresses of the last month flow out of the woman with the blood. It is in its purification process. But in addition, she can absorb the energies of her surroundings and give them to mother earth for transformation. There are two sides to this. It can therefore be too much for women to be in crowds during the moon period, as the uterus pulls in a lot of its surroundings and also transforms it. That is why women like to go into retreat during this holy time. Wise women, however, who are aware of their strength, use this time to help transform the dis harmonies in life, the quarrels in the family and the strife in the community.

> In the womb we can let our ideas and visions mature
The womb is not only there to give birth and to cleanse, it also brings visions into life and manifestation. We can get nine months pregnant with a vision and then bring it to life.

> Moon time woman’s place
In some traditions, moon time women have a special position and place, both in the village and in the ceremonies. Outside their village they have their specially built huts where they can retreat for monthly cleaning. There they are provided with everything they need by the other women. Food and drink are brought to them. The other women also take care of their children. This gives them time for introspection and healing. The place of the moon time women is often situated so that they can look over the village in order to transform disagreements, problems and strife that prevail in the village in the joint work of the moon time women. It is time to give in to feminine intuition and find solutions to the problems of the tribe. In addition, all women’s knowledge is shared among each other and passed on to the young women. So it is for the good of all when the women can retreat to the quiet in the moon time, far from the busy village life. The women are also honored for this. In some cultures there are even ceremonies in which the whole village goes to the lunar time huts on a special day of the year with flowers, food, drinks and gifts to honor and thank the women. 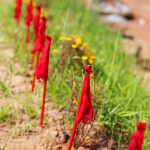 We cordially invite all women in their moon time to use the space for the moon time women and to experience this special time in the circle of the sisterhood and to fulfill this special task in the ceremony in common ... mehr lesen / read more ... 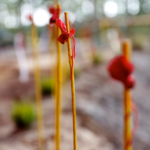 Summarized here is a guide for the moon time women. That helps us to keep a clear energy in the ceremony ... mehr lesen / read more ...